I spent Christmas with my sister in Tenerife and ran a fair bit that week (6 out of 7 days) with a mix of flats and hills. But on January 2nd I went out and did “3 mile recovery” and thus the formal part of my training for SDW100 began.

I was still in decent shape from the efforts of the Summer ultras and Autumn marathons but even so I  wanted to do a proper build up. There are numerous training programmes for marathons, precious few for 100 mile events. Everyone does it differently so I settled on something I thought I could achieve given the time available to me and what I think my body can cope with. I mixed in speed work, hills and back to back long runs.

The aim was to build up month on month and then a savage taper in the final 3 weeks. I also factored in plenty of recovery (cutting back every third week) and taking a total break of one week in the middle after SDW50.

Yeah, I thought you might ask that. For a long while I had the idea that 100K was probably the limit of what I could achieve. I wasn’t sure I could hit the time necessary to qualify for a 100. And you know, 100 miles – that’s for the proper ultra runners, not people like me.

But last year during Race to the King I got the qualifying time and it became possible. So what the hell, I may only get one shot at this and if I am going to do one, I should do it now.

I also really wanted to do the Centurion South Downs race. Any 100 isn’t easy but there are flatter options. SDW100 starts in Winchester, my birthplace, holds a lot of history for me that place. But then so does Sussex and the South Downs. My parents came from West Sussex, we visited a fair bit in my childhood. My Dad ran those hills in his younger days – he was a much better athlete than I can aspire to be, properly quick. I also know the landscape well. So it seemed the natural choice.

How has training gone?

I won’t even pretend I did every run, there were some I missed through feeling a bit tired but that was listening to how my body felt. I also failed to take part in SDW50 due to a family commitment but no matter, what can you do? I did cover 25 miles that weekend so it wasn’t wasted.

I did all my other races, a tough marathon (Portland) and 3 ultras (Green Boy, St. Iltyds and GU36). I did not get ill and most importantly I did not get injured. I put this down to the correct amount of rest during the programme including taking the planned week off at the start of April even though SDW50 didn’t happen. It’s the best I’ve trained since 2016 and I know I am in good shape.

It is relentless and mentally tiring. Six months is a long time to be training for one race and I’m not sure I want to commit to that ever again. I have to balance all of this with work and single parenthood – it is not always easy. But never say never I suppose. 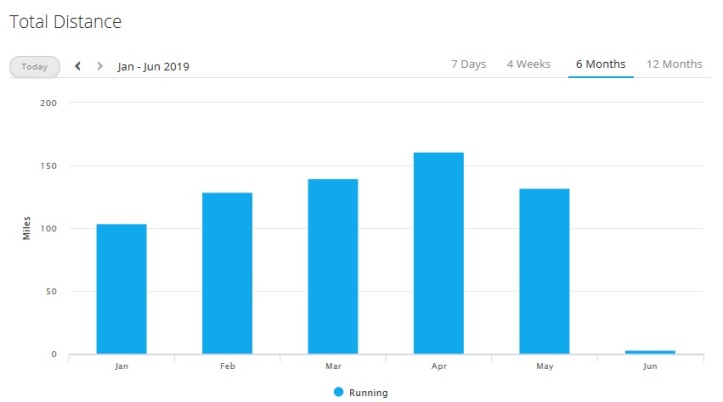 I maybe could have done more, but not that much more. The stats above show month on month increase at a steady rate before the drop off for taper which is what I was aiming for. I certainly feel I have done more than enough. I will get to the start line uninjured and, barring picking something up in the next 4 days, in good health.

Yep, that’s all that’s left, just the small matter of 100 miles. I’m just back from a relaxing week in Portugal and it’s the Monday before the race. I’ve packed my drop bags, got my running vest packed, checked the mandatory kit list at  least 5 times. I cannot do more.

As Ally said in her brilliant pre-race write up, this is the victory lap. The hard work has been done.  Not just over the last six months either, but over the preceding 6 years where I have gone from running no distance and being completely unfit to the point where I can use ultras to train for longer ultras, to a place where I can start this race and look to finish.

Physically and mentally I am prepared.